Gridlock so Openreach defer A381 roadworks 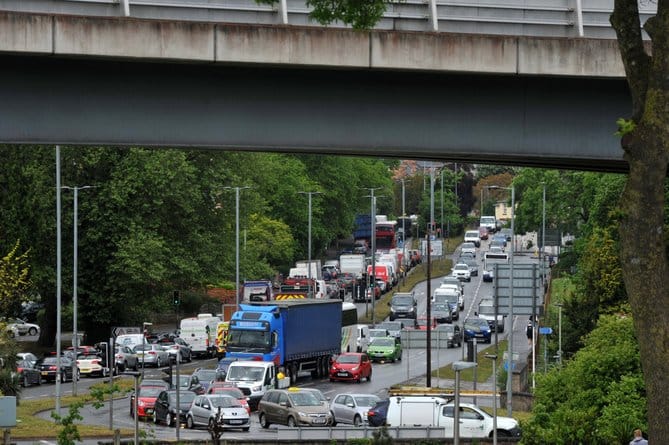 Gridlock on the A381 in Newton Abbot. Picture: Steve Pope (MDA )

AS roadworks by Openreach caused traffic gridlock in Torquay Road, Newton Abbot, on Monday, the firm today (Tuesday) says it has halted the work ‘until a more suitable time’.

One resident called the Mid-Devon Advertiser to say they had received no warning that the traffic lights would be going up in the street on the A381 Torquay Road, near Forde Park, first thing on Monday morning.

Town councillor Mike Joyce said: ‘This is one of the arterial routes through the town, closing off a lane like this for seven days is causing chaos. As far as I’m aware we were given no warning of this.’

Another driver called the paper to say they feared there must have been an accident as traffic was moving so slowly through the town and they were very angry to hear that it was as a result of traffic lights going up in one of Newton Abbot’s main routes.

‘The traffic management on Torquay Road on Monday was in place to clear the ducts we’ll be using to install fibreoptic cables. The work was fully permitted, but once it commenced our partners realised that there was more traffic congestion than expected so the multi-way traffic lights have been removed and we’ll work with the Highways team to find a more suitable time to do the work.

‘We’re really sorry for any inconvenience or disruption caused to residents.’