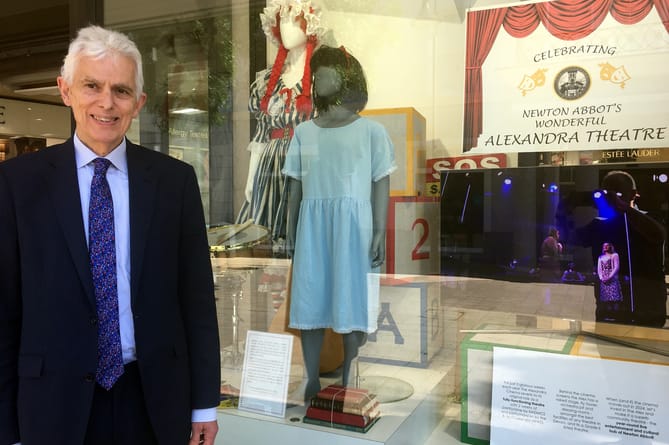 The store is highlighting its pledge backing the campaign to to help secure the future of the venue which is under threat from plans to redevelop the town centre area.

The front window displays feature aim to ‘educate members of the community’ about the proposals for the redevelopment.

Richard Ward, chairman of Newton Abbot and District Musical Comedy Society, said: ‘There is a common misconception in and around Newton Abbot that the Alexandra building is just a cinema.

‘The Alexandra Theatre was built in the late 19th century and only adapted to show films in 1929 by the installation of a removable screen.

‘The screen in the lower auditorium is still removable and behind it is a fully functioning proscenium arch,Victorian theatre with fly tower, stage, orchestra pit and changing rooms.

‘Getting this message across is vital if the campaign to save the Alexandra Theatre is to succeed.

‘Building a new cinema may well be necessary but destroying a Grade 2 listed theatre in the process is wrong.

‘The theatre should be updated to provide a community arts and entertainment hub for everyone, 365 days a year.’

Austins chairman, David Austin, explained: ‘The importance of culture in peoples’ lives cannot be overstated, but can so easily be passed by if the opportunity for involvement is missed, especially from a younger age.

‘We now have just that opportunity to make a real difference for the long-term benefit of the town.

‘The potential reinstatement of the Alexandra to a full working theatre would create an exceptional cultural hub for performing arts, educational activities, workshops ,and involvement for all ages and from all walks of life.

‘Culture and the performing arts bring education to all, incredible involvement and sense of purpose, aspiration and the development of people through their creative potential, and is one of the most valuable attributes for the cohesiveness of society and individual well-being.

‘Let us ensure that the heritage that is already within the town is reinvigorated and taken forward as a real theatre with its potential for the long-term benefit of all.’

The display includes several costumes and props used in productions along with a selection of programmes.

The online campaign can be found at www.change.org/savethealex