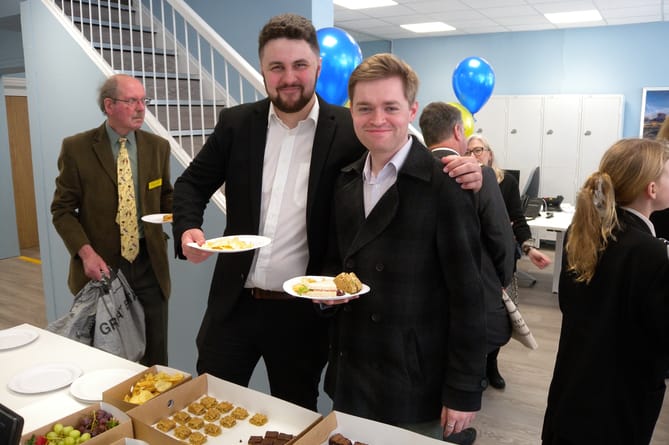 He thanked Tindle Newspapers for ‘showing their faith’ in the town by investing in such well equipped offices at 47 Courtenay Street.

Town Crier Nigel Kenneison did a fine job of declaring the paper had moved office to the general public.

Editor Nick Knight thanked Cllr Joyce and the other guests for sharing such an important day for the Mid-Devon Advertiser, The Teignmouth Post and the Dawlish Gazette and its teams of sales people, journalists, accounts and production experts.

The staff at the paper were delighted to be at the heart of the town and its community, he said.

One special guest at the opening event was Charlotte Saunders from Ipplepen.

She has featured in the paper in recent weeks for her flag making fundraising work. By making Ukrainian flags on the sewing machine she had for Christmas, the 11-year-old has raised more than £4,000 for UNICEF’s Ukraine Appeal.

Nick presented her with a certificate of appreciation from the Mid-Devon Advertiser.

Scott Wood, Managing Director of Tindle Newspapers Ltd, said the new offices had effectively become the national headquarters for the company as the company’s production department and accounts department.

He was delighted with the company’s investment in the town

Newton Abbot MP Anne Marie Morris said she was delighted to see such well appointed offices opening in the town and wished the team every success.

Teignmouth Mayor, Cllr Peter Williams, wished the paper every success for the future.

Cllr Alan Connett, Leader of Teignbridge Council, said it was good to see the newspaper at the heart of its community.