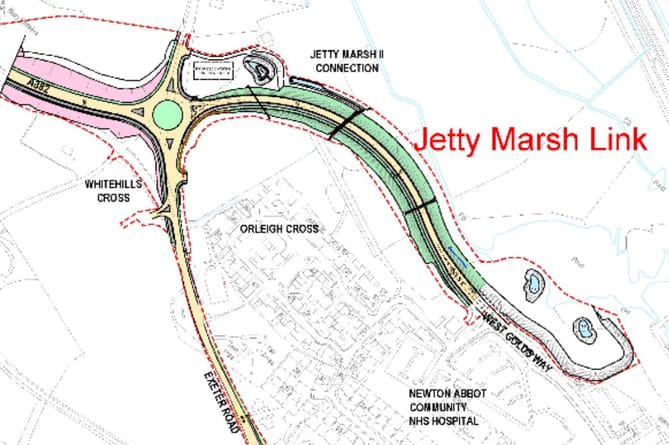 FUNDING has been approved by Teignbridge councillors towards building a new link road at Jetty Marsh.

The £600,000 contribution towards the next phase of the overall scheme to improve transport links and ease congestion in and around Newton Abbot it towards the new road between Newton Abbot hospital at West Golds Way and the A382.

There was some opposition from members of the full council but the financial contribution towards this part of the scheme, funded by money from the Community Infrastructure Levy from developers building new housing, was approved.

Planning permission has already been granted for the project.

The new road will provide a vehicle, cycle and pedestrian route into the town ahead of 135 new homes being built at Berry Knowles.

The Jetty Marsh phase will include a new roundabout at Whitehill Cross and improve access for people walking and cycling into Newton Abbot town centre from the hospital and reduce traffic congestion.

Phase one of the project between Forches Cross and Whitehill Cross was completed last year with Teignbridge contributing £5.1 million towards the £13.2 million cost.

Cllr Gary Taylor, executive member for planning, told the full council: ‘Ongoing upgrades too the A382 corridor have long been a priority for the council and despite the short-term pain that roadworks often bring, these improvements are necessary for the efficiency of the wider road network in and around Newton Abbot.’

Cllr Richard Daws told the meeting he ‘felt sick’ seeing trees being cut down and asked for an environmental impact assessment.

He added more people would be encouraged if the council took steps to reinstate the Heathfield rail line ‘rather than spending money on road improvements to the detriment of the environment’.

Cllr Jackie Hook, cabinet member for climate change, told the committee: ‘We are still under Government demands to build a certain number of houses and a large number of those will be build to the west of Newton Abbot.

‘Therefore, we need to create the infrastructure that will provide for public transport and active and sustainable travel in the future.

‘Of course, it is a balance and it’s a balance in almost every decision we make.’

They added the new road would increase opportunities for cycling and walking as well as providing a new bus ‘corridor’.

Concerns were also raised about the new road leading to ‘rat run’ traffic past the hospital.