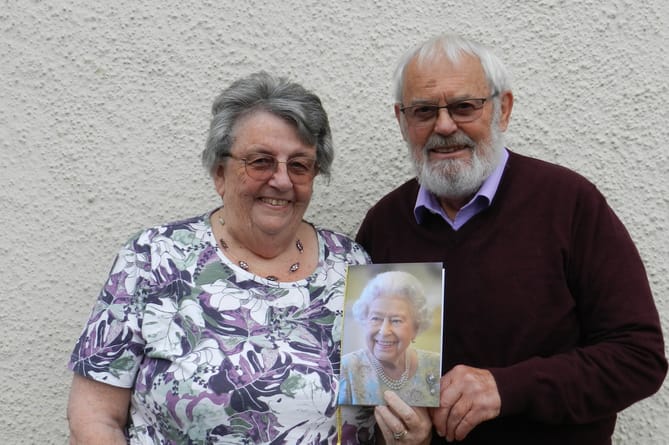 John and Cynthia Coleman with the card they received from Her Majesty the Queen on their Diamond Wedding Anniversary. NP 280222 01 (Tindle Newspapers )

LOCAL couple, John and Cynthia Coleman were delighted to receive a card from Her Majesty the Queen on the occasion of their Diamond Wedding Anniversary.John was born in Crediton and Cynthia was born in Newton Abbot.

They met at Seale-Hayne College in Newton Abbot where John was a student and Cynthia was in the Chemistry Laboratory.John and Cynthia (nee Johnson) were married at St Paul’s Church in Devon Square, Newton Abbot in 1962.

Their first year of marriage was spent on a farm in Wiltshire before their move back to the family farm at Haske, near Crediton in 1963 where John continued to work until he retired at the age of 78 years, in 2018.

Cynthia worked in the office at Ernest Jackson’s and later became the office manager.

She had a change of career and after taking a course in Travel and Tourism worked for a travel agent in Exeter.She later worked for Aid Call at Ashburton, which became Age Concern, until she retired.

Their daughter Helen and their son, Bryan both live locally.

On their anniversary John and Cynthia had a quiet day together, but will have a party later in March, when they will celebrate 60 years together, with family and friends.